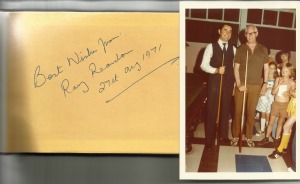 This put him in huge demand for the holiday camp market, which is where I saw him at Pontin’s in 1971.  We went to a different Pontin’s Holiday Camp each summer, and they all tend to merge into one, but I think this was Wall Park, in Brixham, Devon.  He would make a personal appearance, performing some show shots, signing autographs and posing for photographs.

I think it’s fair to say my Dad was more excited about this than I was.  In the photo I love the way he is almost pushing the children out of the way to get his photo taken with Ray Reardon!  I don’t remember any other adults wanting photo’s taken at the time.  He also grabbed my autograph book for me and got it signed and dated, which is something I would never have done because I was always far too shy.

To be fair I do remember using my own children in this way at various events, particularly Brighton & Hove Albion’s annual ‘meet the player’ gatherings for the Junior Seagulls!

Welcome to my blog where I am enjoying meeting my family - past and present - one at a time. Join me as I learn who my ancestors were, where they lived, what their occupations were and what everyday life was like for them.
View all posts by Jackie Dinnis →
This entry was posted in Gordon Charles Dinnis, SPORT, Table tennis and tagged Pontins, Table Tennis. Bookmark the permalink.