John Albert Walter Harold Dinnis was born on 22 January 1895 in Camberwell, London. He was my grand uncle, younger brother of my grandfather, Joseph Taylor Dinnis. His parents were George Dinnis and Catherine Taylor. 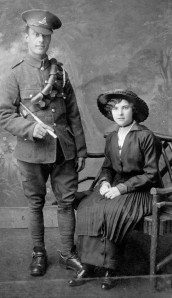 In 1904, when John was aged 9, he and my grandfather Joseph were pupils at the Hitherfield Road School in Lambeth. We know this from the London School Admissions records. 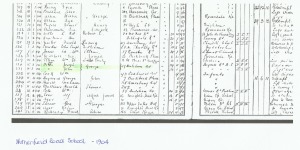 There is a great website including the history of the school here: http://www.hitherfield.co.uk/history  The following comes from this website:

“The story of Hitherfield School begins just over 100 years ago at the   end of the 19th century.  The surrounding area was changing.  Streets of   suburban houses were replacing large houses with surrounding estate   gardens and families with children were moving in. The street name   “Hitherfield Road” was officially approved in 1867.

Hitherfield School   was started under the London School Board. The original building was in   Hitherfield Road, alongside the current entrance to the Children’s   Centre, Nursery and Infant Buildings.   The school occupied a triangular   site bounded by the railway, the backs of properties in Hitherfield   Road and Leigham Vale.

On August 28th 1899, Hitherfield Road School was opened in a   corrugated iron building situated in Hitherfield Road.  Our Log Books   show that the girls’ department began with 41 pupils, the head teacher   and one assistant.   The boys’ department had 54 pupils and the same   staff plus a teacher for five half days per week.

In January 1901 the school was re-organised as a mixed and infants’ department under one headteacher.

In 1910 the original Junior building was completed and came into use. Classrooms were designed to accommodate 40 children.”

At the same time close by, Florence Violet Heard was living with her parents Arthur and Frances, and her two elder brothers in Malmesbury Road and attending Malmesbury Road School, Tower Hamlets.

Our next information comes from the England Census of 1911. By this time Florence was 13, living at 67a Ellerslie Road, Lambeth, London with her parents and two brothers – Arthur George, a milkman was aged 19 and William Thomas, 15 is listed as ‘at home’. Florence is listed as a scholar, The head of their household, Arthur was a Carman in the industry of Provision of Groceries.

John Albert HW Dinnis meanwhile was living at 30 Trehern Road, Mortlake, Peckham. He was 17 years of age, working as an Errand Boy for Boots stores.

He lived with his eldest brother and his wife – George James and Helen May, aged 32 and 30. George was a Tobacconist Assistant, they had been married 6 years and had no children. My grandfather, Joseph Taylor Dinnis was also living here, aged 19, a Fishmongers Assistant. 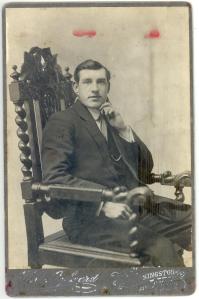 The photograph at the top of the page was taken in 1916, which was of course during the First World War. I haven’t traced the Dinnis brothers through this war yet, but hope to do so at some point.

The wedding took place on August 17th 1918. John’s name is written as ‘Jack’ he was 23 and a soldier, Florence was 21. They both list their address as 67a Ellerslie Road, which is where the Heard family were living in 1911. One of the witnesses is William Garrard, which is a name we will come back to in future posts regarding this family. The other witness was George John Dinnis, John’s elder brother. His father, George Dinnis was dead at this point, having passed away in 1906.

The next post will give more details of the married life of John and Florence.

Welcome to my blog where I am enjoying meeting my family - past and present - one at a time. Join me as I learn who my ancestors were, where they lived, what their occupations were and what everyday life was like for them.
View all posts by Jackie Dinnis →
This entry was posted in Catherine Taylor, Cora Annie Amelia Dinnis, Elsie Lilian Julia Dinnis, Florence Violet Heard, George Dinnis, Harry Leonard Percy Dinnis, John Albert H. Walter Dinnis, Joseph Taylor Dinnis and tagged Camberwell, Family History, History. Bookmark the permalink.