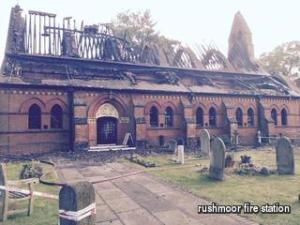 This news story caught my eye yesterday. After a few checks online I think it is the church my grandparents were married in. Looking at their marriage certificate, I see they were married at All Saints Church, Fleet on 19 December 1915. 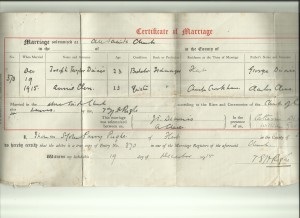 This is also confirmed in the Surrey, England, Marriages Index, and the England and Wales FreeBMD Index lists their wedding in the district of Hartley Wintney which is just two and a half miles from Fleet.

A 16 year old boy has been arrested on suspicion of arson.

More about the fire can be seen by following the link below, or googling ‘Fleet church fire’

Welcome to my blog where I am enjoying meeting my family - past and present - one at a time. Join me as I learn who my ancestors were, where they lived, what their occupations were and what everyday life was like for them.
View all posts by Jackie Dinnis →
This entry was posted in Annie Cleeve, Churches, Joseph Taylor Dinnis and tagged All Saints Church, Fleet, Wedding. Bookmark the permalink.

2 Responses to Church fire in Fleet